Manufacturers today rely more and more on industrial robots for efficiency and quality. Robots used for welding, cutting, material handling, dispensing, and assembly must operate at very high levels of reliability and repeatability/accuracy to meet the demands of modern manufacturing. This means that any environmental changes or mechanical failure of the robot system - whether the robot itself or any of its peripherals - can result in many hours of lost production or can generate large amounts of scrap parts.

The AccuBeamTM (also known as AutoCalTM Series 2) system offers an inline robot calibration solution designed to quickly and automatically guarantee the performance of robotic equipment.  Adaptable to a wide variety of robotic applications and compatible with most robot types, the AutoCal Series 2 system can detect drift or sudden changes to the robot structure itself (including joint offsets) as well as its  Tool Center Point (TCP), and then automatically correct for those changes without any operator intervention.  This means no "guessing" of what went wrong; no valuable time wasted re-teaching robot programs, and no loss of production quality!

·     All that, while controlling quality and drastically minimizing any production downtime!

The AutoCal Series 2 System - How it works

The AutoCal Series 2 System comes in different forms, depending on the particular robot controller and its level of integration (contact Dynalog for more information). However, a typical installation consists of (1) the  AutoCal software, (2) twin beam lasers, and (3) a rugged industrial sensor.  The  AutoCal Series 2 System relies on simple and automatic measurements: no special artifact or interface required! Between production cycles, the robot automatically executes - in a matter of seconds - a "Quick-Check" measurement routine to assess overall system performance and to detect any drift or crash of the robot or TCP. Any changes to the robot structure or TCP can then be automatically corrected through the  AutoCal Series 2 System's compensation process. Finally, the AutoCal system confirms the accuracy of the corrected robot and its TCP, to ensure consistent quality and process control. 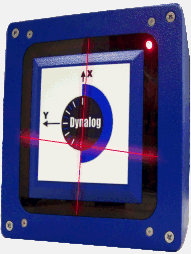